"For it is by grace you have been saved, through faith" Ephesians 2:8 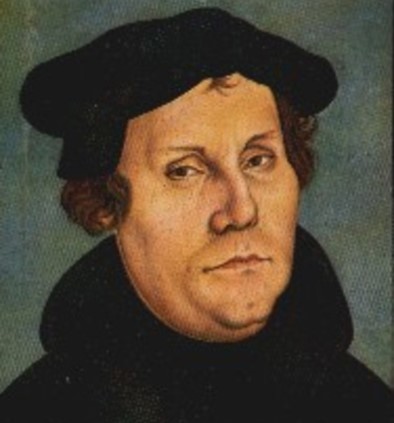 2017 marks the 500th anniversary of the start of the Protestant Reformation.  On October 31, 1517, Martin Luther nailed his 95 Theses to the door of the church in Wittenburg (Germany), touching off a massive cultural revolution that changed the Christian Church around the world.

In order to imagine how significant this event was, just think of how many Churches there are in the world today; how many different expressions there are of the Christian faith.  When Luther was growing up, there was only one Church in Western Europe: the Roman Catholic Church.  Everybody was Roman Catholic; there was no other way to be Christian.  This monopoly on Christian life gave the Roman Catholic Church immense power, and this power had turned into abuse, violence, the use of torture, and a shocking disregard for many of the core principles of the Good News of Jesus Christ.  For centuries, people had noticed these abuses and protested against them; people had attempted the reformation of the Church, but these attempts had failed.  In 1517, however, all kinds of things lined up, and it all came to a boiling point with Martin Luther's 95 Theses.

Every Christian Church in the world today has been shaped by Martin Luther's words and actions.  He created the space for many new expressions of the Christian faith, including Anglicanism.  He insisted that the worship services be said in the local language of the people (that is, not in Latin) so that people can understand what happens on a Sunday morning, and he was a huge advocate of congregational singing.  He insisted that every person be granted access to the Holy Scriptures, leading to an explosion of Bible translations and affordable, accessible print copies of the Bible.  Any person who, today, has a copy of the Bible sitting at home owes a debt of thanks to Martin Luther.  Perhaps most importantly, he called Christians to read Scripture, and to base our lives of faith - and the life of faith of our Churches - on what we read in the Bible.  Thanks to the intellectual space Luther offered to the Church, the Anglican tradition took up his call to us, and added to it: that we base our life as Christians and our life as a Church on Scripture, as well as Reason and Tradition.

Martin Luther's commitments to these principles have been so important to the whole Church of Christ that the Roman Catholic Church now acknowledges that the abuses he spoke against were real and damning, and that he has indeed reformed the whole Church for the greater glory of God.

And so we commemorate Luther's incredible faithfulness as a Christian.  We celebrate his unwavering commitment to proclaim that God's grace is given for everybody, not just the powerful; and his courage to take a stand against abuse.

For more information, check out some of these articles from the Anglican Journal:

Jun 6
The Second Sunday after Pentecost